Welcome to the latest instalment in my Birth Stories feature. Today we have the the story of Cohen’s unplanned home birth, shared by mum Jade from Everyday Young Mum.

Hi my name Jade and I’m the mum to a gorgeous 4 month old little boy we called Cohen. I am 20 years old and this is our birth story!

On Thursday the 30th June I went to my midwife 40 weeks and 4 days overdue. I was tired and fed up. The midwife gave me a sweep to see if it would start anything off. I was told to expect to have back ache and Braxton Hicks, but if nothing happens in 48 hours then it hadn’t worked, she was pretty certain I wouldn’t be coming back to have another sweep. I hoped she was right, all I wanted to do was hold my little man in my arms. On the Thursday I had all the aches and pains as expected, but I went to bed and everything stopped.  Great false labour!!

On the Friday the same aches and pains returned and slowly throughout the day the Braxton Hicks got stronger and stronger. I was still convinced that nothing was going to happen even though I couldn’t get comfortable for very long. My mum suggested that I went shopping for her and then came home and had a nice hot bath. So I did as I had nothing to loose, the more I walked the tighter then tightenings got. But again after a soak in the bath everything stopped and I thought it was just false labour again. I went to bed that night convinced I was going to go back and nothing would have happened.

On Saturday the 2nd July 2016 i woke up at 3 am with a massive contraction. It took me by shock and at first I wasn’t very sure it was a contraction. But I ran to loo and I felt I was going to wet myself. Sure enough a few minute later i had another contraction. YES! THIS IS IT!! I never thought i would have been so excited to have been in pain in my life. I continued to have contractions at 7 minutes apart until 5 am. I went and woke my mum up now I was sure that I was in labour. My mum was so excited she was dancing around in the kitchen.

At 6 am I rang the hospital as I was having a big contraction and then a small 2 minute contraction in between and I wanted to make sure it was all normal. They reassured me everything was fine and that I should have a bath and relax. My mum ran me a bath and went and told my sister i was in labour, whilst i rang my partner to tell him that the baby was on his way and to come over. At about 6:30am I climbed into the bath and began having contraction which were 5 mins apart.

With my partner on the way I began to grow impatient and felt that i need some help with the pain. So I told my sister to call the hospital and tell them I would be making my way in soon. At this point everything began to go very quickly. I suddenly felt the need to get out of the bath.

By 7:30am I was on my bathroom floor moaning with contraction 2 mins apart. My partner still wasn’t here yet and I needed help. My sister called the hospital again and told them I was having contractions 2 minutes apart and I needed to come in. They told us they would get the maternity bleep to call us back and if I felt I couldn’t wait then to call an ambulance.

I told her to call an ambulance – I knew there was no way I was going to make it to the hospital and I knew my little man wasn’t going to be waiting around for too long. With that my waters broke and I automatically began pushing. Soon after my partner arrived, and he helped my mum move me onto the bed.

Shortly after the ambulance arrived and they gave me gas & air (that stuff is great and I would recommend it to anyone that is offered it!) At some point after that the midwives turned up. I was quite spaced out and what felt like a minute was actually 10.

The midwife checked to see how dilated I was and realised that I was in fact 8cm and that I was going no where. My next memory is them telling me that Cohen’s heart rate kept dipping and that if it happened with the next contraction they would have to cut me (episiotomy). They did end up cutting me and in all honesty I didn’t really feel it.

The next thing I knew they were telling me that they could see his head and I needed to keep pushing. Then he was here!! He let out the most almighty cry and I opened my eyes to my beautiful baby boy being placed on my chest. At that moment my life changed forever and all I could do was kiss him. 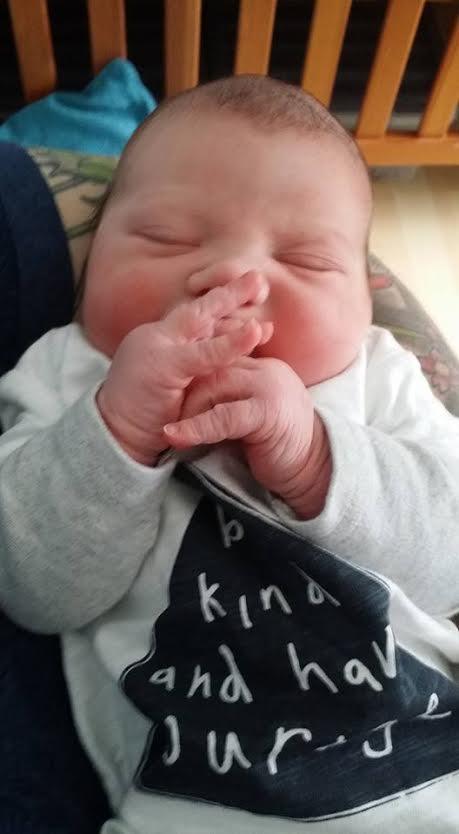 If you have been featured on Birth Stories and would like to display my badge in your sidebar, then please grab the code below