Welcome to the latest instalment in my Birth Stories feature. Today we have the the story of Dara’s arrival into the world, shared by mum Neve from We The Parents .

I am deeply grateful that each of my two children’s births were positive and deeply affirming. I’m going to share the story of my second – the birth of our little boy, Dara. He was born at home in a water pool and it couldn’t have gone any better.

If it weren’t for the gentle assertiveness of my husband, however, it could been very different.There was a moment when the midwives were close to redirecting the birth to hospital. Thankfully, that didn’t happen and we had the birth we had hoped for.

This story begins with preparation.

Before you run a mile please believe me that this isn’t going to be a sanctimonious lecture from a self-righteous mom.

My husband and I are not experts. Nor are we the types you see jogging at 7.30 on a Sunday morning. If that is you, by the way, we salute you – you are marvellous.

When it comes to giving birth, however, I passionately believe that preparation and practice are essential to achieving the birth you want.

We hypnobirthed both our children. If you’ve not come across hypnobirthing before, you are probably reading that word and thinking, “sounds a little hippie-dippie.” At first, I thought the same. In fact, hypnobirthing is a common sense approach based in science and the natural wisdom of women’s bodies and minds.

In a nutshell, hypnobirthing involves getting to know and understand what our bodies are up to during pregnancy and (most importantly) labour. Things like the way our uterus muscles work to first draw up and open the cervix (the “up stage” of labour) and then contract to squ-ease our baby out (the “down stage”).

Hypnobirthing also focuses on getting women mentally prepared, for example, releasing fearful assumptions we may have about labour. It does this in a calm and methodical way using techniques like: positive affirmation, breathing and visualisation exercises, and being intentional about the words we use (eg, “surge” instead of “contraction”).

Keane and I did our hypnobirthing practise in the months leading up to the birth and I stuck up positive birthing affirmation notes everywhere.

That said, we didn’t do nearly as much practise as we did during our first pregnancy. My husband nervously complained that we were slacking off, but then again, with a 3yr old at home, who were we kidding? Finding quiet time to practice was tough, but I did manage a little something everyday and it turned out to be enough. When the birth came round, I felt confident, enthusiastic and ready.

Labour began gently at about 11.30pm.

I am grateful for how it went. With the previous birth of my daughter, Leyla, my waters had broken and then the contractions (“surges”) kicked in very intensely straight away. I found it difficult and much of my hypnobirthing went out the window!

With Dara it was completely different. My surges began slowly and gently. I was able to breathe through them and use my hypnobirthing visualisations. I felt calm and wasn’t in any hurry to call the midwives. Keane and I got back into bed where we both (sort of) slept until about 6am. By this time the surges were powerful and steady.

Keane ran downstairs, and with the help of Leyla they got the birthing pool ready. We then rang our support team – the midwives, my mom and best friend (Ellie). 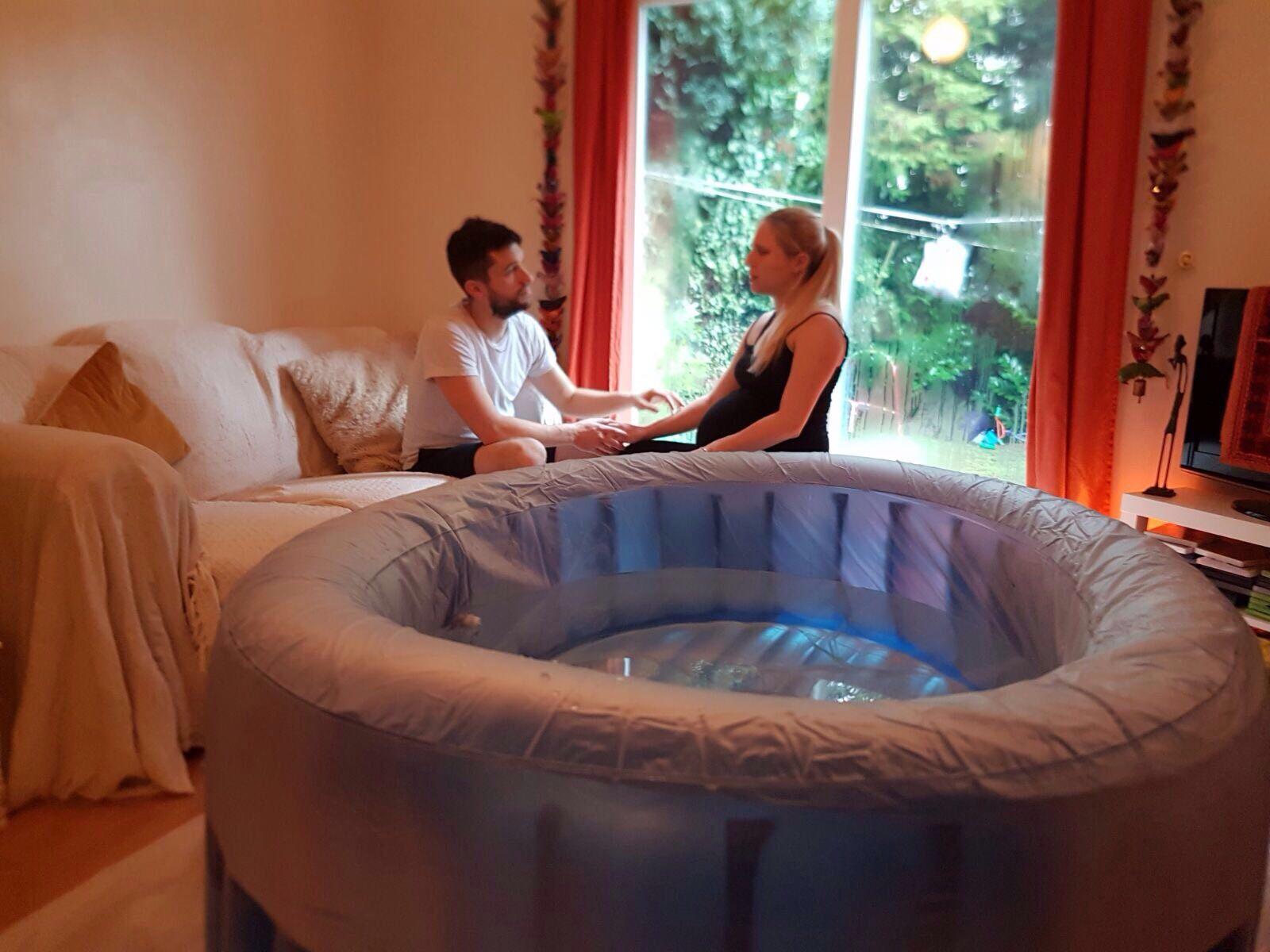 With these things in place, we were able to settle into a rhythm. Each time a surge came, I would breathe through it and Keane would gently stroke my arm (another hypnobirthing technique which helped to anchor me in a safe, relaxed state.) Leyla joined in and stroked my arm too. It was beautiful. Very calm. We just spoke and laughed together as a family. Excitement and anticipation mixed together and it all felt slightly magic, like being in a different world.

Ellie arrived and Keane filled up the birthing pool. We lived in a very small house at the time, so the pool took up most of our front room! Nevertheless, we turned it into a peaceful sanctuary. Essential oils lightly filled the air and a delicate soundtrack played in the background. A combination of piano, relaxation music and spoken positive affirmations… “I ease my baby easily and quickly into the world.” “I am fully prepared for a gentle and easy birth.” “My body is perfectly made to birth my baby naturally and easily.”

When the midwife turned up we were very pleased with her. (In the UK, you don’t know who will be on-shift until it happens.) We instantly had a good feeling about her and we connected straight away.

I cannot stress enough how important it is to feel comfortable with your midwives. It is sadly often overlooked in the medical system. I guess it’s a ‘soft,’ unquantifiable thing that isn’t easily measured, and so it can get lost. But the stark reality is that whether a woman feels safe, respected and understood by her caregivers can make all the difference in the outcome of a birth. Women are not robots and our bodies respond powerfully and physiologically to our minds. (Just try going for a pee when you know there is a queue outside and someone keeps knocking on the door! Pressure and anxiety will physically stop the body from doing its thing.)

Labour progressed perfectly. The surges steadily increased in their strength and duration. But then something happened that almost changed the course of the birth. Our midwives took a blood pressure reading which came out high. They were worried and didn’t hide it. Just seeing at their faces my heart sank. Everything had been going so well! I felt gutted. They explained that if my heart rate remained high that I’d have to go into hospital.

The midwives said they’d like to check it again after ten minutes. They did and it was still high. The midwives looked uncomfortable. They knew how much we wanted a home birth, but obviously had a duty of care and wanted to ensure the baby and I were safe. At this point Keane gently but assertively said that we would both like to give it another 15 minutes to see if it came down. He continued to gently stroke my arm and told me everything was going to be okay.

15 minutes later my blood pressure had dropped – we were back on!!!

My Mom and Ellie were amazing, keeping me hydrated and playing with Leyla whilst Keane and I stayed focused on my body and where I was in my labour.

At 11am (about 12 hours after my labour gently began) I just knew that my cervix was fully open and that I was transitioning from the “up” to the “down” phase, ready to squ-ease baby out. I told the midwives and said I’d like to get into the pool.

For the record, my midwives were awesome, supportive and fully respectful of our birthing plan. We were lucky to have them. At this point, however, they did something (unintentionally) which I didn’t find helpful. They both questioned whether I was indeed at transition. Apparently, with a hypnobirthing women, often being calm and quiet, it’s easy to assume she has not progressed as much as she actually has.

One said, “we’d like to do a vaginal examination because we think you may only be three centimetres dilated and we wouldn’t want you to get in the pool if this were the case.” When you’ve been labouring for a long time and it’s reached it’s most intense point, you don’t want to hear that you may only be 3 centimetres!!! I felt dismayed and exhausted. Having been focusing and aware of my body, I just knew that I was transitioning. Keane and I had a quick word and we said we didn’t want a vaginal examination immediately but that I would go to the toilet once more and we’d take it from there.

On the toilet, I began to moo like a cow! The midwives ran up the stairs, smiling. “Okay,” they said, “you are definitely transitioning. We can hear it!”

I got into the pool. The whole energy changed at that moment. Up until this point, everyone had been whispering and respectfully giving Keane and I quiet space to focus on my surges. Now it just felt different, I didn’t feel I needed quiet. I made a joke (can’t remember what), everyone laughed and a bubble burst. From that point everyone began to talk excitedly. The main midwife coached me in the “down” stage. (It’s something that many hypnobirthing women don’t want. They want to continue with the quiet meditation, doing it all themselves.) For me though, it really helped to have the midwives instructions and encouragement.

Keane sat next to the pool holding my hand, and Leyla sat on his knee. She was serious and thoughtful. Not anxious (after all, there was an exuberant mood in the air – lots of laughing and smiling), but she was somehow tuned into the gravity of the situation. She was asking questions, and Grandma, Pappa and Ellie were there to answer them.

After half an hour of pushing in the pool – and just when I felt like I’d had enough – Dara arrived. 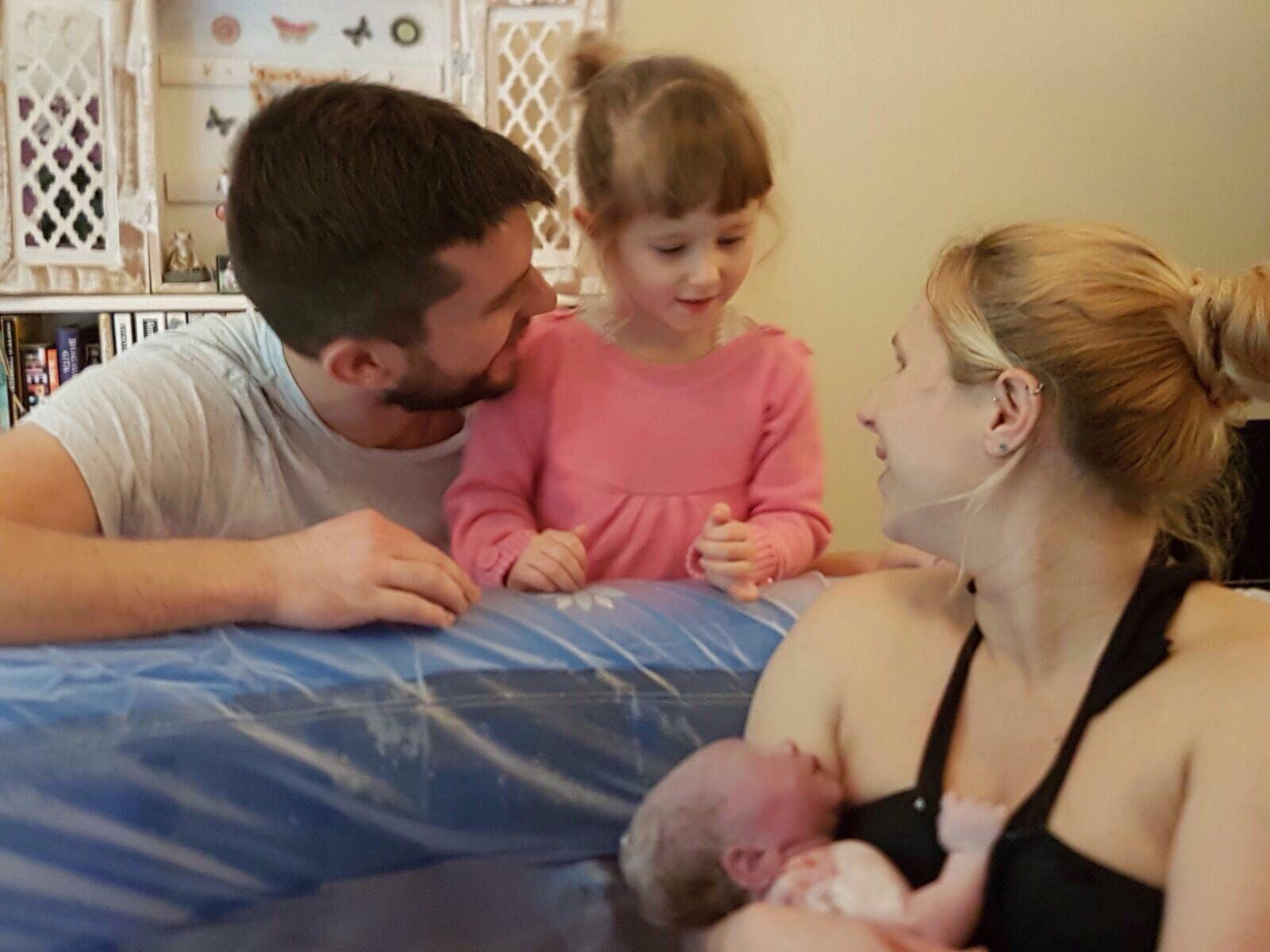 He was an angel. He cried for literally five seconds before peacefully and quietly settling skin to skin against my bosom. My heart melted.

With Leyla (our first), I remember feeling surreal when I held her. I logically knew she was my daughter and that I was meant to love her. But is was all so strange. In fact, she was a tiny stranger, one that cried without stopping for about two years (bless her darling soul!)

With Dara though, I was so comfortable and gushing with love instantly. I’m sure it was because I knew all about being a parent by then. The dynamic of being a mom and having a dependent little person was familiar.

Funnily, the umbilical chord was really short. I could barely reach him for a kiss!

Now at home, with Dara born, I sat back on my couch (covered in towels) and my mom made me a cup of tea. We all breathed a sigh of relief. It was so relaxing. I have to say that, in my experience, having a home birth was just so much better than a hospital birth. It was calm, safe and comfortable.

A quick clean up by Grandma and Keane, and 30 minutes after giving birth I was sat on my coach in my home like nothing had happened, except for the fact I had a wonderful, glowing bundle of light in my arms, eyes closed, tiny chest rising and falling as he slept.

A huge thank you to Keane (hubby), Leyla (daughter), Mom, Ellie and the midwives. I’d also like to thoroughly recommend Katharine Grave’s – Hypnobirthing Book and Ina May’s – Guide to Childbirth without which I would never have had such a wonderful birthing experience.