Now that the kids have gone back to school, I have a rare 5 minutes to sit down and tell you all about a product I have recently discovered – the Gro Anywhere Blind from the Gro company.

The Gro Anywhere blind is a portable black out blind which can be used anywhere. Now, my kids have always had blackout blinds at home, and have always been good sleepers, staying in bed until at least 7am. However, we have discovered that when we go away they always wake much much earlier and can not be persauded to return to bed once awake! So, knowing that Christmas was going to be a busy time, we decided to try out the Gro Anywhere blind.

The first thing to mention is how easy it is to use. I was worried that it would be very fiddly, and that it wouldn’t cover the whole window, leaving gaps for light to come through. Once we arrived at the house of a relative where we were staying over Christmas, I set about putting the blind up. It took minutes! It attaches to the glass with suction cups, the same as you find on car window shades. They attach firmly and don’t slide, and they fit so snugly that there really was no light coming through. As it is adjustable it should fit most windows too.

The real test was 2 very excited children! Christmas Eve arrived and they eventually settled into bed, while me and hubby prepared ourselves for a very early morning! However…….two little people did not appear at our door until 7.20am! A miracle – especially in a strange house at Christmas!!
The pattern continued for the following 2 nights, and I genuinely do believe that the Gro Anywhere blind was responsible.

When we were ready to come home, the removal was even more simple – the suction cups have small tabs which release the pressure, and it peeled away from the window in seconds. It even fits back into the travel bag, which a lot of products don’t seem to once you have taken them out! The kids even asked for it to be put up when we got home as they like the star design on the blind.

This product was something I was initially a bit dubious about, but have to say I am now a total convert and it will be coming with us on every trip from now on, especially when new baby arrives in May!

The Gro Anywhere blind can be purchased here: http://gro.co.uk/gro-anywhere-blind 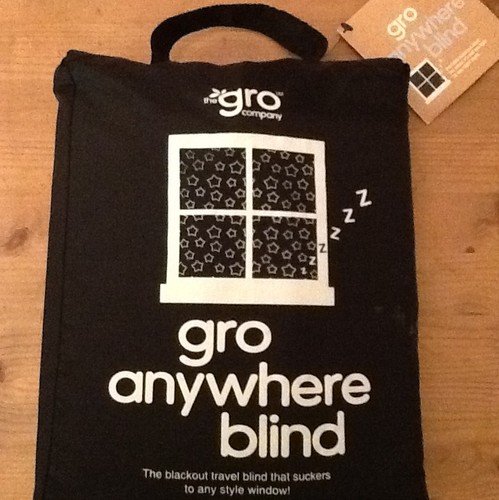