Max’s first year is flying by, and he is already 7 months old. He is a real cheeky little monkey at the moment, and knows exactly how to get what he wants! His latest trick is to do a very funny little fake cough to get some attention – and it works! Yesterday at the weigh-in clinic, he had all the nurses and health visitors cooing over him. He is going to be a heartbreaker I reckon!

What Max has learnt this month

So much has happened for Max this month. He now has 2 little bottom teeth, and the fact he can now sit up so well makes him look so grown up. He is most certainly not a needy little newborn anymore, and is desperate to be on the move. When he is on his tummy, he will pull his knees up under him – at the moment he hasn’t worked out how to get his arms up, but I don’t think it will be long before he is off on his hands and knees.

7 months already…..where does the time go? 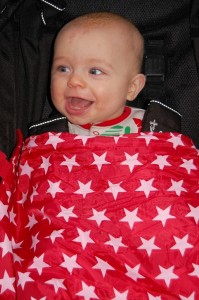