Today I have a guest post from the lovely Jess over at Babi a Fi. She writes about how her parenting expectations have clashed with the reality – and I think we can all relate to these!

Before Marianna arrived I knew exactly how this parenthood thing was going to go down. I would lose the baby weight, be fitter than ever, and stroll around regally with a full face of make-up and a perfectly attired baby. My house would look like a showroom and baba would know nothing free range, free trade, ethically sourced, 100% natural, additive free perfection.

The reality was, er, somewhat different.

Far from looking like something out of Baby Vogue, Marianna was lucky if she got dressed at all. It was just out of one sick stained sleepsuit into another, hopefully less sick stained, sleepsuit. As my literary hero, Jerome K. Jerome, once wrote:

“Putting them [babies] in any clothes at all seems absurd to my mind. Goodness knows there is enough of dressing and undressing to be gone through in life without beginning it before we need; and one would think that people who live in bed might at all events be spared the torture. Why wake the poor little wretches up in the morning to take one lot of clothes off, fix another lot on, and put them to bed again, and then at night haul them out once more, merely to change everything back?”

My house does look like a showroom. If it had recently had a bomb dropped on it. There are baby toys – and the things she prefers to her toys, like envelopes and empty crisp packets – strewn all over the floor, the mountain of ironing is only overshadowed by the mountain of washing, and I daren’t even look behind the sofa for fear of what I’ll find among the build up of dust, half eaten rusks, and what remains of my sanity.

If only that pregnancy nesting instinct hadn’t disappeared the moment Marianna was discharged from the hospital.

No child of mine was going to be babysat by the television. It would be sensory play and tummy time all the way. Except it wasn’t, obviously, and there were many occasions in Marianna’s first year that we both sat open mouthed and blank eyed, staring at the screen in the corner. Her because it was bright and colourful, and she probably couldn’t quite focus on it all properly. Me because sleep deprivation had robbed me of anything resembling energy.

Worse still, I introduced my own downfall in the form of a Rainbow DVD. It had been my favourite show as a nipper and, with it’s old-school retro charm, what was the worst that could happen… Fast forward six months and all day, every day, we’re treated to the pitiful refrain of “Brrrabrrrry!” (as close an approximation of Rainbow as Marianna can manage). If it isn’t forthcoming the cries only increase in volume and urgency.

The absolute worst is that we invariably give in. Anything for a quiet life seems justifiable.

I was going to follow all the advice. I mean, it was being given out for a reason, right? But my breastfeeding plans were scuppered when Marianna decided that, actually, an uncomplicated birth was the last thing she wanted, and my commitment to the perfect bottle feeding regime was quickly dispensed with.

We fed on demand, let her try chocolate ice-cream and, without my constant vigilance, once I’d returned to work I found out her dad was making up bottles from the tap instead of with sterilised water. It got worse. We bought baby food in jars, gave in to pleas to try Mummy’s Jaffa Cake, and totally ignored the 5 Second Rule.

Touch wood, she has a constitution of iron – so it can’t have done her too much harm!

We were going to go out every day, attend all the classes, and see the world. We managed a few but mostly we stayed local. And by local I mean, of course, that we spent way too much time at home, indoors, watching other people visit places on the television.

I’ve resolved to do better, perhaps I’ll even succeed. But what I have learned – and it’s something they don’t tell you in the guide books – is that it’s not all that important, where we are or what we’re doing. It’s not about the perfect home, or the perfect meal plan, or even the perfect daily routine. It’s spending time together that matters. 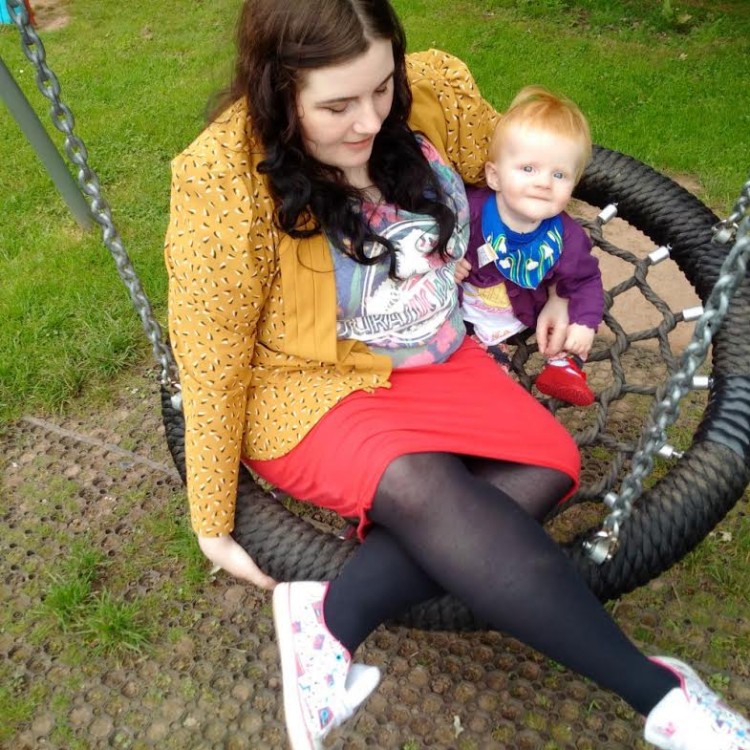 Thank you so much to Jess for sharing this post, it made me smile and nod along – apart from the bit about sharing Jaffa Cakes. They are not for sharing 😉