This month is Caesarean Awareness Month, and I have decided to share my 4 very different caesarean experiences.

I fell pregnant with Gemma not long after Kevin and I got engaged – we were over the moon, and couldn’t wait to welcome our first child into the world.

I had a birth plan from fairly early on. I knew what I wanted – a water birth with gas and air if needed, no other drugs, no epidural, little intervention. I wanted the baby delivered onto my tummy, I wanted Kevin to cut the cord, I wanted her to breastfeed straight away, with immediate skin to skin.

That’s not what I got. Not even close.

I started having contraction 2 weeks after my due date, the night before I was booked for induction. I was pleased that I wouldn’t have to be induced, and we hung out at home as long as possible. I lay in the bath and Kevin poured water over my bump during a contraction. We headed off to the local birthing centre a while later, and I tried gas and air and bounced on a birthing ball. I progressed fairly well, although the baby was in a back to back position and the midwives kept a close eye on me.

At 8cm dilated, the baby’s heart rate started to dip. I was monitored and examined, and it was found that the baby was in an awkward position and her head was still very high. The decision was made to transfer me to hospital by ambulance. It was the most uncomfortable journey of my life – the gas and air ran out, the rails on the bed were loose and I kept sliding about, and I had a midwife who rather have been anywhere than with me.

On arrival at the hospital I was given more gas and air, examined again and my waters broke. Because the baby’s head was high there were concerns about a cord prolapse, and I was given constant monitoring – I really wanted to move about but couldn’t. I was sick, I felt a bit out of control and was in agony. I was fully dilated, and was encouraged to start pushing.

After almost 2 hours, the baby’s had descended well. There had been several concerns about the heart rate dropping, and it was decided she needed to come out sooner rather than later. A ventouse cap was attached and over a few contractions I pushed and the doctor pulled – before the cap became detached. Very quickly, forceps were used instead – I have never felt pain like it. I had no pain relief on board, the gas and air had been taken away and it was absolute agony. I heard someone say the head was crowning – it was almost over!

Alarms started going off. The room filled with people. I heard someone say that they had lost the baby’s heart rate. I was wheeled down a corridor at high speed, and the next thing I knew I had a mask placed over my face and slipped into oblivion.

I woke in a recovery room, with Kevin by my side. He looked white as a sheet, and I just knew our baby hadn’t made it. Even when they told me otherwise, and showed me a photo of her in the SCBU I didn’t believe them. My baby’s heart had stopped – that was the last thing I remember hearing, so I didn’t know why they kept showing me a picture of a baby girl covered in wires.

Once I had come around properly, I was taken to SCBU to meet Gemma. They put her in my arms, and the tears flowed. I kept saying ‘but is she OK?’ over and over. She stayed in SCBU for a few days, having antibiotics to treat the ventouse wound, and a scan of her head to make sure there was no further damage. She was fed by tube for a day or two, and I pumped milk for her. She had a drip in her tiny hand, and wires all over her tiny body, and I still didn’t really believe this was my baby. 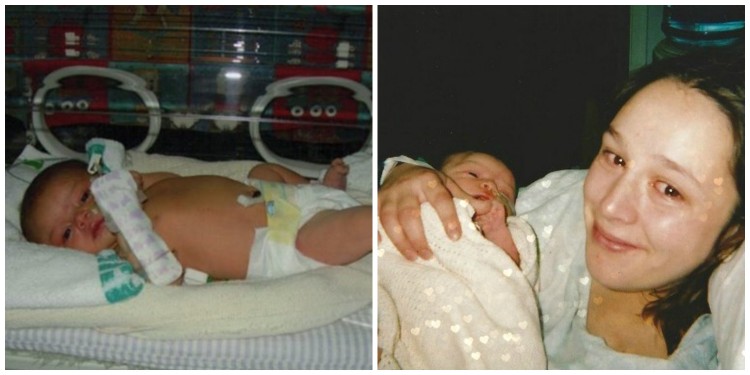 After a few days we were discharged, and took Gemma home. I fed her, changed her, cared for her in a blur. I felt like I was on another planet. I didn’t want any harm to come to her, I thought she was beautiful and wonderful, but I didn’t bond with her back then. In my head, my baby had died, and I expected Gemma to be taken away from me any moment.

The health visitor took me to my GP, who mentioned postnatal depression and PTSD. I had a few counselling sessions with a midwife, where we talked through my labour and birth notes. She kept telling me it wasn’t my fault, but I felt it was. I felt guilty. If I had changed positions, pushed harder, tolerated the forceps better maybe she would have been born naturally. Maybe she wouldn’t have been born white, floppy and not breathing. Maybe my poor husband wouldn’t have had to watch the doctors rush this lifeless baby past him in the corridor. Maybe things would have been much different.

I missed out on the birth I so desperately wanted, and it really affected me. It still does if I am honest. I get flashbacks, I have nightmares, I analyse everything that happened over and over again, wishing I had done things differently. My baby girl turned 10 this year, and I still remember it as if it was yesterday. I don’t think that will ever go away.