Welcome to the latest instalment in my blog series: Birth Stories. Today we have the story of Jenni from Odd Socks and Lollipops and Boo, and how this little girl came into the world underwater.

I was pretty sure that my daughter was going to arrive before her due date, not really early but,  you know, a couple of days before my due date. My due date had been moved back at my 12 week scan (from the earlier due date I was given at a scan we had at 9 weeks) so maybe that’s why I felt like that? Like the first date was right.

My due date – the 6th December 2013 came and went – I even had a sweep that day, nothing. I then decided that 11.12.13 would make an awesome birthdate so I decided that she would, of course arrive then, clearly I needed to learn that I was not in charge! I had another sweep on the 12th December and to be honest by this point I was getting very fed of up waiting! I was still experiencing 24/7 nausea and I just wanted to hold my baby!

In the early hours of the morning of Friday 13th December 2013 I woke up with pains, it was about 1am but I decided that as I had had them on and off for the last week or so I would try to get back to sleep as they wouldn’t amount to anything.  A little while later I woke, they were getting worse.  I woke my husband who, in his practical Scandinavian way, wrote down the time of each contraction in a little notebook.  (I still have that notebook – it’s in a special box with Boo’s hospital bands and other things).  We rang the hospital and they said that it sounded positive and to see how long I could last before coming in to see them. I waited and waited – I really did not want to make the trek to the hospital to be told I needed to go home again!

At 5.30am I decided I needed to get moving and off we went to the hospital with a hot water bottle and our hospital bags! I remember there was a discussion once we got in to the hospital, between my husband and myself about the wheelchairs, he suggested I use one and I was adamant I wouldn’t. So I walked slowly through the hospital to the lifts and up we went.I was shown to one of the rooms in the midwife led side of the maternity unit – next to the room with the birthing pool – which I was told was currently free and when I was far enough along I could use. I had wanted a water birth so this was music to my ears! We sat in the room and waited, I sat in this chair and then that chair and then walked about.  The gas and air was lovely.  I couldn’t eat and threw up everything I drank (so my labour really was like most of the rest of my pregnancy).

I was looked after during my labour by a lovely student midwife who was re-training – she had worked for a few years as a nurse in A&E but she wanted to be a midwife.  It was nice to have her near constant presence and that of another midwife who kept popping in and out. Time moved strangely during my labour but about midmorning my contractions were becoming too painful and I wanted something other than gas and air for the pain, unless I could go in to the water.  I really wanted to go in the water! I was told that I was due to be examined in 45 minutes so I waited – the longest 45 minutes of my life! And finally I was told I was 7cm and that I could go in the water birthing pool.

I don’t remember the move from one room to the next. It’s funny. I do remember the water, and it was bliss. It really helped and the pain didn’t become unbearable again until I had to start pushing. I wasn’t in the pool long to be honest and then it was time to start pushing.  Just as I felt the urge to push my waters broke and there was meconium in them.I was told if my daughter wasn’t out soon I would have to get out of the pool.  I really didn’t think I would manage to get out of the pool. It was providing so much relief.  So, I pushed… two pushes later my husband and the midwife could see Boo’s hair, and with the next push Boo arrived completely. No head and then shoulders, just out in one push – clearly I really didn’t want to get out of that pool! 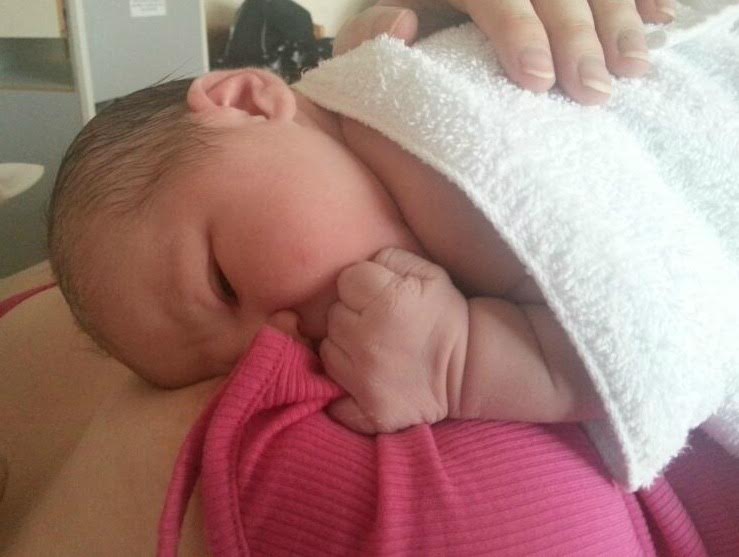 I am pretty sure that was why I ended up with a 2nd degree tear, the rush, but maybe I would have torn anyway.  Boo was whisked off to see the Dr due to the meconium in the waters, and my husband went with her.  And I climbed out of the pool and had the injection to deliver the placenta.  The injection was not in my birth plan (which was a loose collection of ideas rather than a plan) but I changed my mind at the time.

Boo was fine and we were moved round to another room, so another lady could use the pool.  And then I was stitched back together! And my husband had cuddles with Boo.  I had to wait a while as the midwife thought I might need to be seen by the Dr, but after she had cleaned me up she was happy to do it herself. It was probably more invasive that the birth itself.  Not only was the midwife there but the student, watching what she was doing — and I had to listen as she explained what she was doing to the student.  Which was fairly bone chilling! And after that we moved as a family of three into yet another room where we could introduce Boo to our visitors! 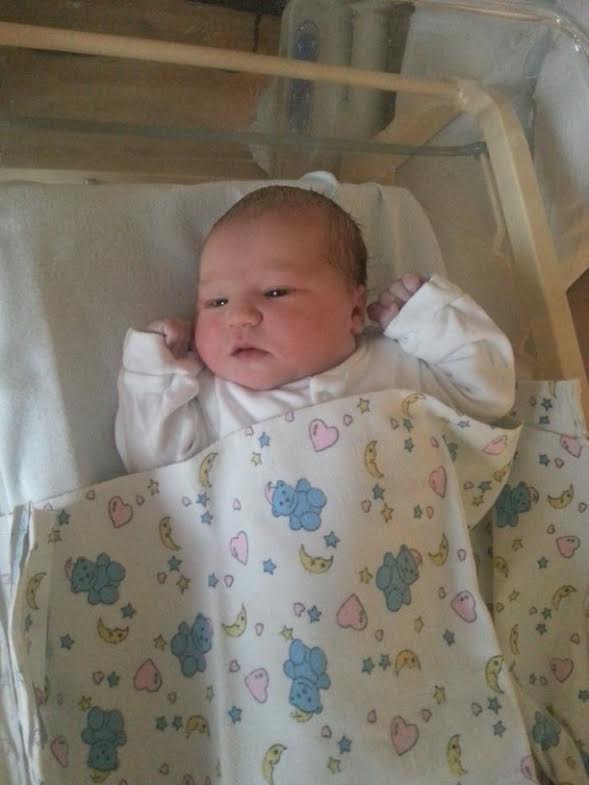 Thank you so much to Jenni for sharing the story of how her little girl entered the world – and those gorgeous photos too! I always fancied a water birth but was never able to have one, so I do really love reading about them!

If you would like to share your birth story, please get in touch – my email address is katefever6@gmail.com