This post was sent to me by someone who wanted to write their feelings down, but for reasons that will become obvious, did not feel comfortable sharing on their own little space on the web. 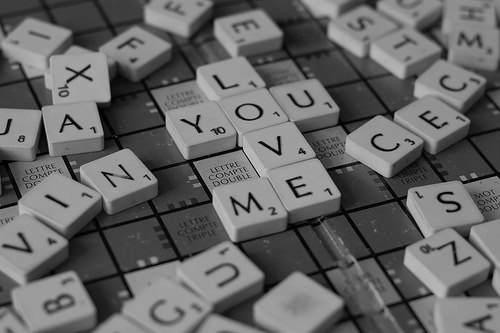 I’m in a relationship that I hate and makes me feel low, but he won’t let me get out of it. I have told him repeatedly how unhappy I am, but he says he loves me so we should be together, but that doesn’t make it any better for me. What does love mean? I don’t even know anymore..

We have only been together for 11 months, but for 6 of those months I have been telling him that I’m unhappy; nothing has changed. The guy I fell in love with, the funny guy who would do anything to make me happy, has been overshadowed by a selfish, manipulative, nasty man who makes me cry more than anyone ever has before. And coming from a girl who has been bullied and raped in the past, that is quite an achievement.

I don’t think I ask for much;

– I ask for him to listen to me if I am talking about a topic of conversation that I choose, and for it not to always be on his terms. I would like to have a voice.

– I ask for him to respect my beliefs and to stop being racist, homophobic and nasty about others in front of me, just to show that my feelings mean something and aren’t just a joke to him.

– I ask for him to put his phone down for more than 5 minutes at a time and spend some proper time with me. Not all the time, just when we’re out for a meal, or trying to play a game together, or spending the night in a fancy hotel. Especially as I know he’s been messaging another girl…

– I ask for him to not demand his own way all the time, and not turn nasty when he doesn’t get it. For him not to call me a c*nt, or a nutter, or a freak. I want for my wants and needs to be taken into consideration and not be bullied into his way of life every single time, even over the simplest of matters. I want to stop living in his shadow.

– I ask for him to balance out his insults with a compliment from time-to-time, for him to tell me I look nice if I’ve spent a few hours getting ready for a night out and not tell me that ‘I look better than I have for weeks’ when I’ve been ill. Maybe every now and again even make me feel like he wants me in the bedroom and not just roll me over, do his business and then pick up his phone five seconds after he’s finished. Even more so when he has made some very personal insults about intimate areas and compares me to exes.

I just want to feel loved, respected, appreciated and heard… Isn’t that what everyone wants or am I asking too much?

I don’t by any means think I am perfect. I can nag, I can be overly-sensitive at times. I have low self esteem, always have had, so I might even crave a little more attention than a lot of girls. Saying this I’m not a jealous girl and he can go out with his mates when he wants, he can talk to girls when he wants and I won’t get jealous. I just want him to love me when he’s with me.

All in all I try my hardest to please and take care, and I don’t feel like I get that back. He is very good at telling me what I want to hear when it’s bad… ‘I love you so much’, ‘I can’t live without you’, ‘I need you’, all that jazz. But I have realised that despite talking the talk he won’t walk the walk. I know he can, he did when I first met him and got me to fall in love with him. He just won’t. I wish I was worth making the effort for but I’m obviously not.

The guy is a misogynist, that’s all there is to it. The first few times I met his mum should have been a give away, he treated her like dirt. No grown man should treat his mum the way he treats her, he’s a spoilt little boy who bullies women to get his own way. I remember pointing out that I have a son one day early on, I asked how he would feel if he thought I might be treated in the same manner and he said he could see my point. Obviously not.

I can’t talk to my parents about it because I know they’ll back me into a corner making it even more difficult for me. I don’t really talk to my own friends anymore as I know they can all see the change in me and want me to leave him, but don’t understand that I’m scared to. So It’s easier to just cut myself off.

It sounds silly saying I’m scared to leave him when he makes me feel so bad, but without him I am on my own; a stay at home single mum. I have no-one to turn to when he tries to win me back and I’m too weak. I hate myself for letting me get in this situation. He talks about marriage, kids, living together… I don’t want any of that with him. He’s talked about it all from very early on and if I’m honest it always freaked me out, I just didn’t realise how much he was worming his way in, and now I’m trapped in it and don’t know of a way out.

I should point out that he’s never physically hurt me, but his words are so hurtful I feel emotionally battered. There isn’t a name under the sun he’s not called me, he uses my low self esteem against me and blames that, never accepting responsibility himself. He has told me no child should be left in my care because I’m a freak, very hard to hear as a mother. He tells me he hates me. He has backed me into a corner shouting horrible things at me before because I wouldn’t give him the pin number to my bank card. I’m not thick skinned enough for this kind of verbal attack.

Unfortunately I am now at a stage in the relationship where I have lowered my standards and started to change and I hate who I am becoming. I was always the kind of person who would always try and have respect for a person no matter how horrible they were. I have now found myself trying to get one over on him when I can, trying to make him feel the way I feel. Tit-for-tat basically. It’s childish and boring, and I would like to think I am a better person than that, but I’ve tried everything else; crying, screaming, talking, begging…

I am powerless, weak and sensitive, I just want for someone to come and rescue me. I want to be held. I want someone to come and tell me I’ll be ok and give me the affection I crave so much. I can give a partner so much. I don’t have much confidence in myself but I know I can be a good partner, that I will look after someone so much, be faithful and give them all I have. I also think I deserve at least some of that back. But until I can find the strength to get out of the shames of a relationship I’m in now I have to just keep my head down, keep myself to myself and keep trying to figure a way out. I am lonely and desperate.