Recently, I was lucky enough to be chosen as one of Bazooka Candy’s film reviewers, and the children were over the moon to be told they were going to see Despicable Me 2. It is a film they have been wanting to see ever since seeing a trailer for it earlier this year, and have been eagerly counting down the days until their cinema trip.
So this weekend, we set off to the cinema with high expectations. We are big fans of Despicable Me, and were hoping that the second installment would be as good as the first.
It was 🙂 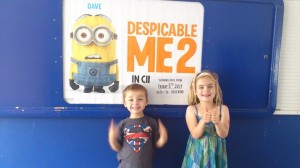 From an adults point of view, the film has enough humour and content to make it easy and enjoyable to watch. There is nothing worse than having to sit through a kids film that has nothing to appeal to adults – that can be a very long couple of hours! Despicable Me 2 has that clever ‘adult’ undertone that makes it fun for us big people too.
From a kids point of view, what more could you want that a man riding a shark into a volcano, and a bunch of crazy yellow ‘minions’ eating jelly? When you are 5 and 7, I think that is pretty much your ideal way to spend an afternoon right?
JACOB: I liked when the baddie man went into the volcano on a shark, he went right into the lava and exploded!
GEMMA: Gru fell in love and they did dancing. And the minions got poisoned with purple juice and they had to eat chilly jam to save themselves.
Gemma and Jacob have talked of nothing else since seeing this film, and have already informed me that I have to buy it on DVD when it is released. I think we can safely say that this film gets a big thumbs up all round!
And a big thanks to Bazooka Candy for providing the snacks – they went down a treat with both children and adults alike! 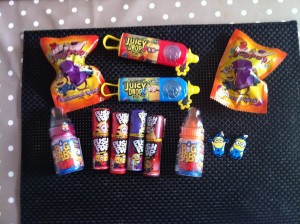 * We were provided with sweets and film tickets free of charge by Bazooka Candy as part of their film reviewers competition. All thoughts, opinions and photos are my own, and those of my husband and children *