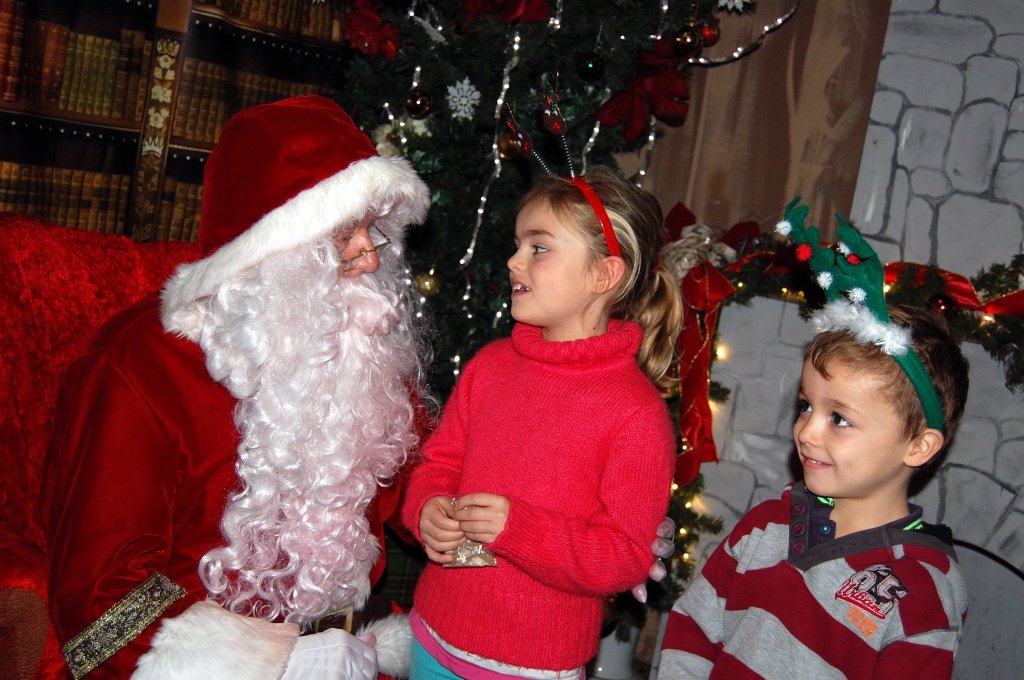 Before I start, let me just say that I try to be open-minded about all parenting approaches.  Variety is great, I embrace it and as long as you are confident that you can produce a reasonable and well-rounded adult at the end of it that is fine. But sometimes, very rarely, I hear things that make me want to push them over the edge and just send them off to Looneyville on the spot.

The discussion went along these lines.  “Yes, we’ve been reading Christmas books for months so that he knows what Christmas is”

“Neither are we” (That’s right, there are 2 people of the 3 in this conversation who agree!)

(cutting a long story very short…) “We don’t want to lie to baby, I mean if baby asks we’ll probably go along with it but we’re not going to teach baby”

“Yeah, we thought that if baby asks us ‘When is Santa coming?’, we’ll just say ‘Well, when do you think he’s coming?’ and not actually confirm his existence”

Let me pause here for a moment and give you all a moment to retrieve your jaws from the floor.  I am not one to start a conflict when I disagree, I’ll normally just stay quiet. But here I could not. They went on to talk about how they didn’t think it was right to lie to their little ones about Santa!!! I couldn’t help but exclaim that I thought they were living on a different planet and that we have a special Santa key as we don’t have a chimney so that Santa’s elves will slip through the letterbox to get it and let him in, and that next year I’m already thinking about getting 2 elves to sit on the fireplace and watch over my little man so that one of them can go and let Santa know if he’s not been good enough to go on the nice list.

I love Christmas … the sparkles, the twinkling lights, the warm fuzzy feeling…the magic! After they left, I really started thinking. Can you have the magic of Christmas without Santa? Isn’t that what creates those beautiful feelings that we have during the festive period?  And also, if those children are not going to learn about Santa at home, will they have stockings? Presumably not.  How will the parents control what they learn once they start school? Do they want them to be the odd bods in the playground who don’t believe in magic and Christmas miracles?

The magic of Christmas is about possibilities, adventure, imagination, allowing their creativity to run wild.  It is all about the joy of freedom and that’s what childhood is about.  Their ideas just made me feel sad.  They are taking away those chances.  They are forcing them to see the harsh realities of the world far before their time. Life is far more interesting and exciting when you believe in possibilities.

I kind of understand it from a Christian point of view, Christmas is not about Santa.  It is actually about the birth of Jesus and that’s why we celebrate.  But Christmas has become much more than that and has brought together many different traditions and beliefs.  I know a lot of people believe that whilst there is not a big jolly rosy-cheeked man shimmying down our chimneys once a year, the character has some basis in reality.

And as for not lying to their kids…Hands up if you have honestly never ever lied to your children?! Not even an “All gone, you ate them all!” when clearly you ate half the packet of chocolate buttons?! Perhaps not lying and being honest is a bold intention and sounds fantastic.  But I can’t help that once those little ones start moving and talking, things might change.

When are they going to explain that animals don’t talk? That wizards/pirates/monsters/princesses/talking trains/(insert other fantasy creatures) don’t exist either.  If it’s wrong to tell them that Santa is real, then it must be wrong to let them believe that all of these things are real too? It’s going to leave them with a very limited range of reading material when they visit the library.  Is it really wrong to let our children believe in good, inspiring, fun characters to let them stretch their minds and imaginations and encourage them to develop positive traits?!

Is this a ‘thing’? Being honest to our kids to the point that we don’t teach them about Santa? If this is a ‘thing’, it is not a ‘thing’ that I want any part of (I’m tempted to start hunting down inappropriate Santa based presents for them both). Or am I in the wrong here? Am I the one that doesn’t understand how best to support my child?  Either way, I am totally confused.

And yes, I will most definitely be teaching my little man about Santa. And the tooth fairy. And the Easter bunny. And about wizards, fairies and monsters with 3 heads. And about talking trains.

* The writer of this post does not want to be named. I am simply hosting for them. *