With the summer just around the corner (apparently) we have started to do bits and pieces in the garden, to get it ready for summer BBQ’s and lots of outdoor play. We are lucky enough to have 2 areas in the garden – a lawn for football and picnics and a decked area for eating. We also have a fabulous playhouse which the children actually use all year round, but will be perfect this summer, for all sorts of fun and games. As well as this, we have the usual motley collection of garden toys – a slide, a double swing set, a sandpit/paddling pool and endless footballs. We knew we wanted something new this year, especially with the baby due in June, so that the older children can hopefully get outside and have a lot of fun while we are caught up in the newborn feeding and nappy haze! That’s where Big Game Hunters came in, sending us a rather fabulous Giant Connect 4 game for the garden. 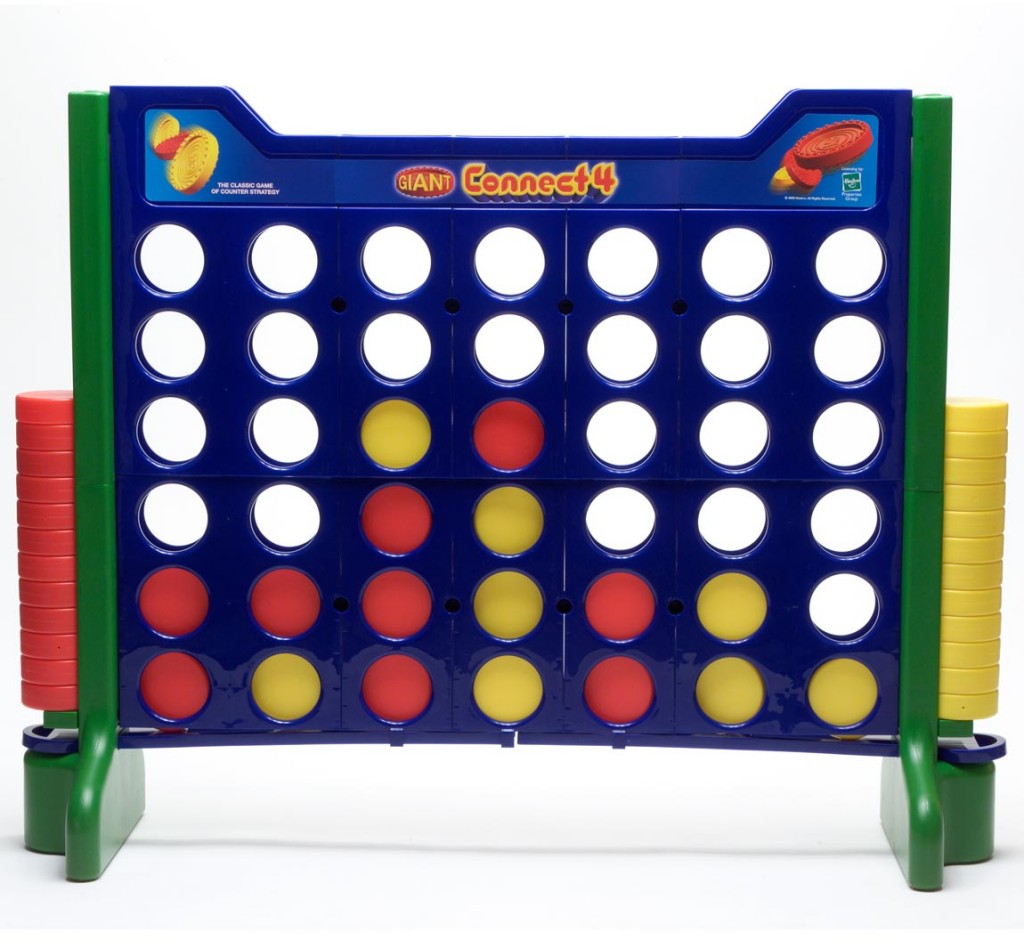 As this is one of the childrens favourite board games, I knew they would love a full sized version they could play outdoors. I wasn’t wrong.

As soon as it arrived, we got it set up – which takes 5 minutes. Everything simply slots together as in the board game version, and the counters stack on the sides for easy storage. I feel this stack could do with some sort of guard or enclosure, as they do fall off quite easily. Once you are set up, it’s game on! 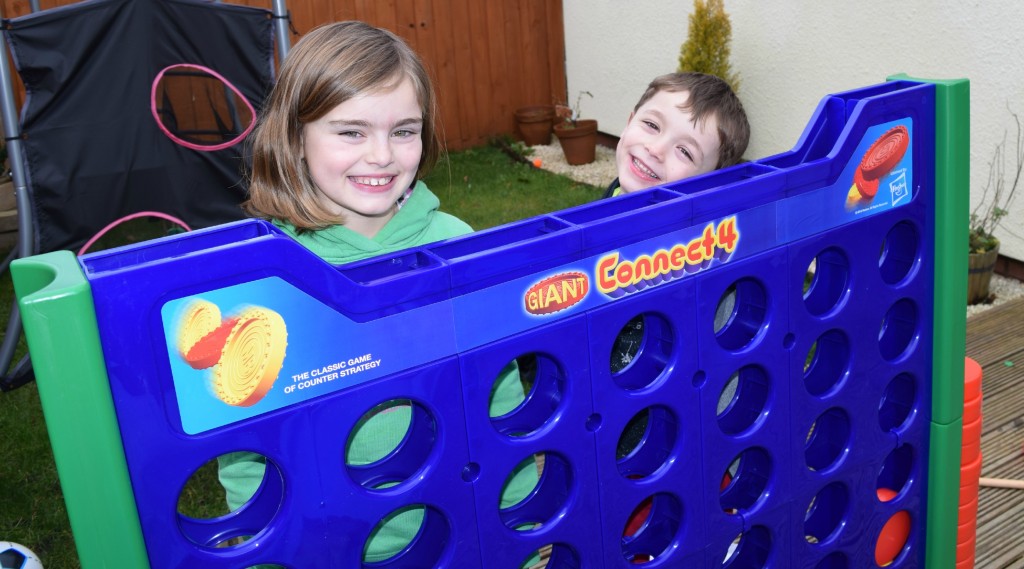 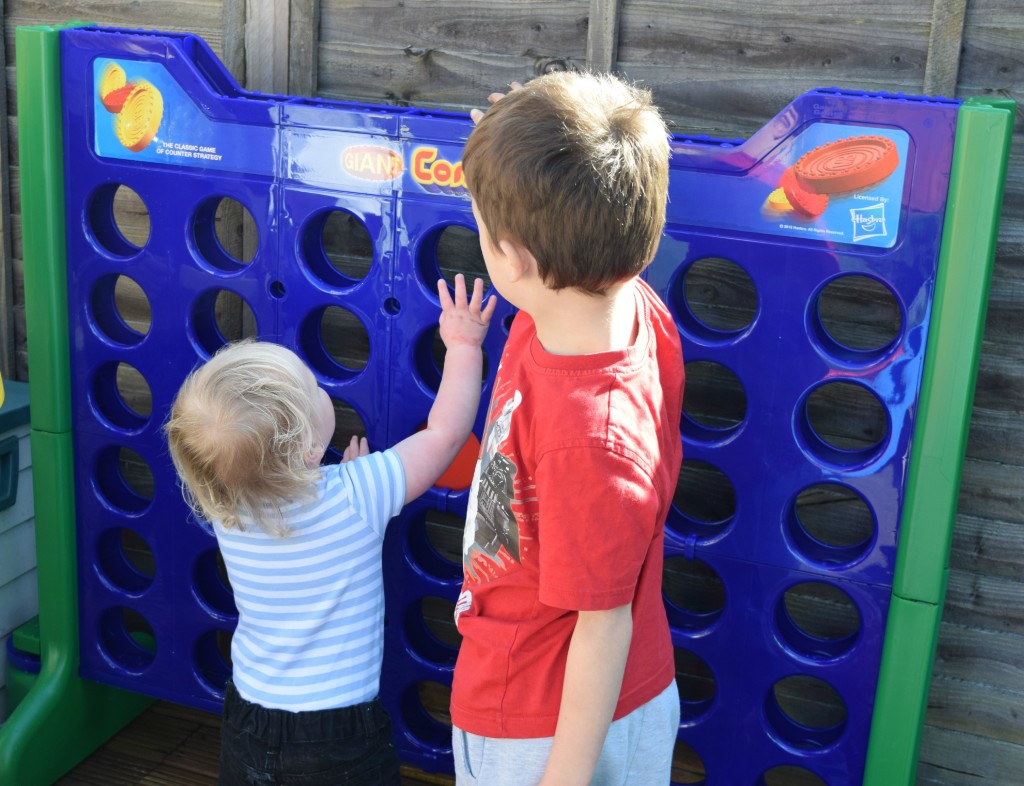 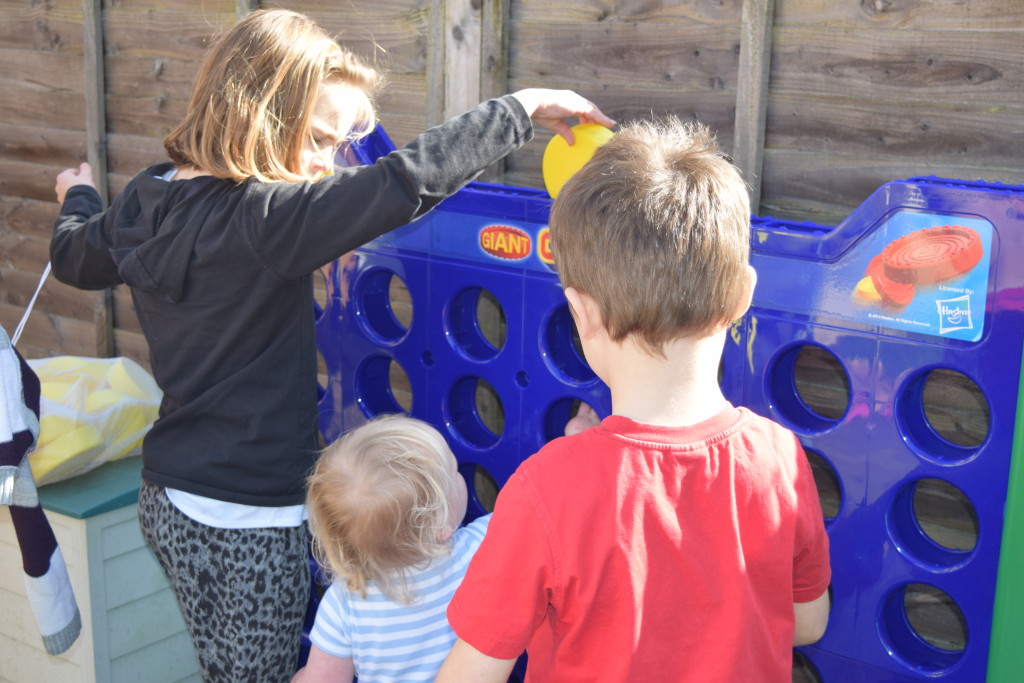 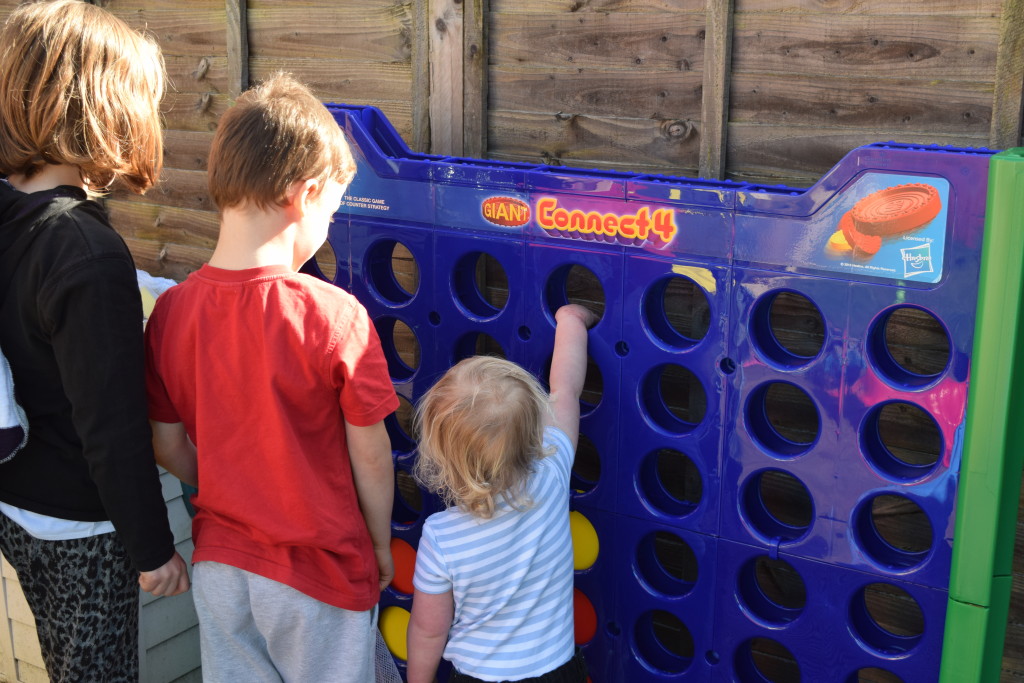 Despite the fact that he can’t reach the top, Max loves joining in too, and trying to catch the counters as they fall down. He also quite likes to open the sliding shutter at the bottom so all the counters fall out mid game….oops! 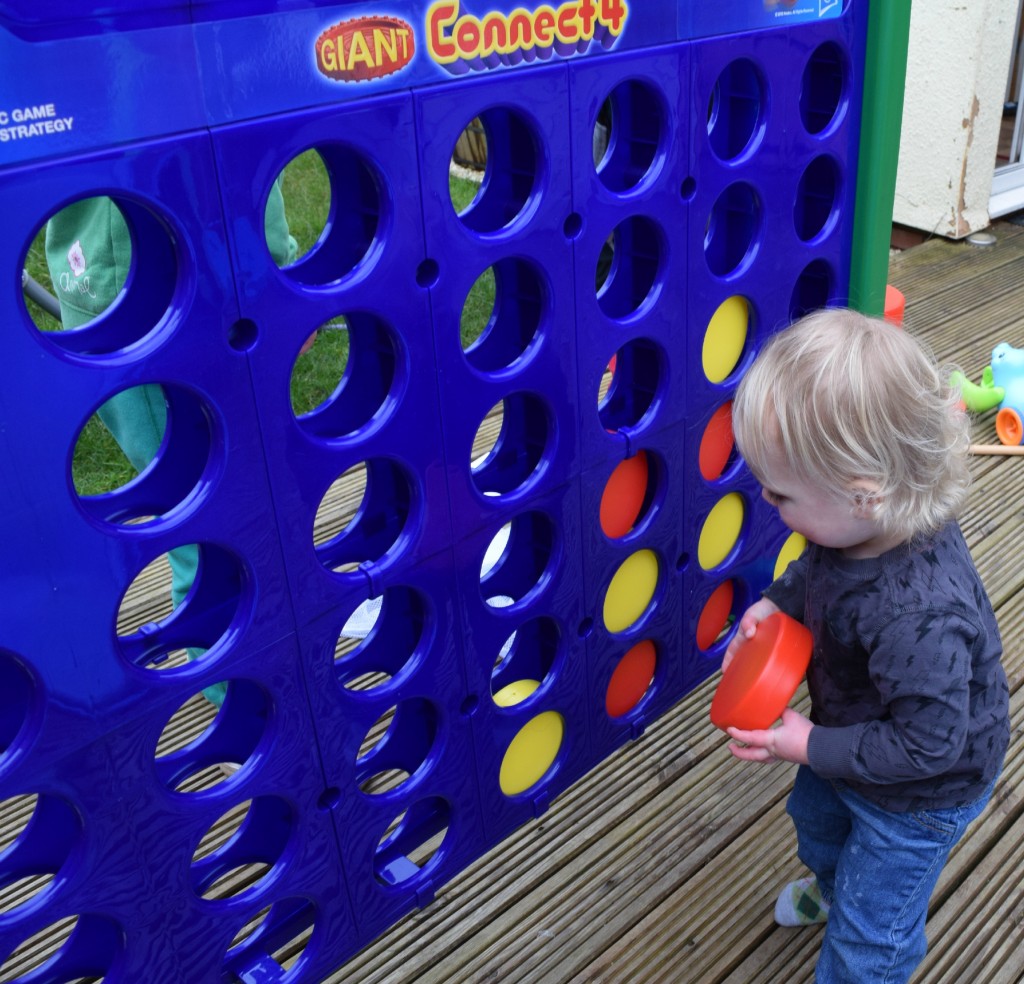 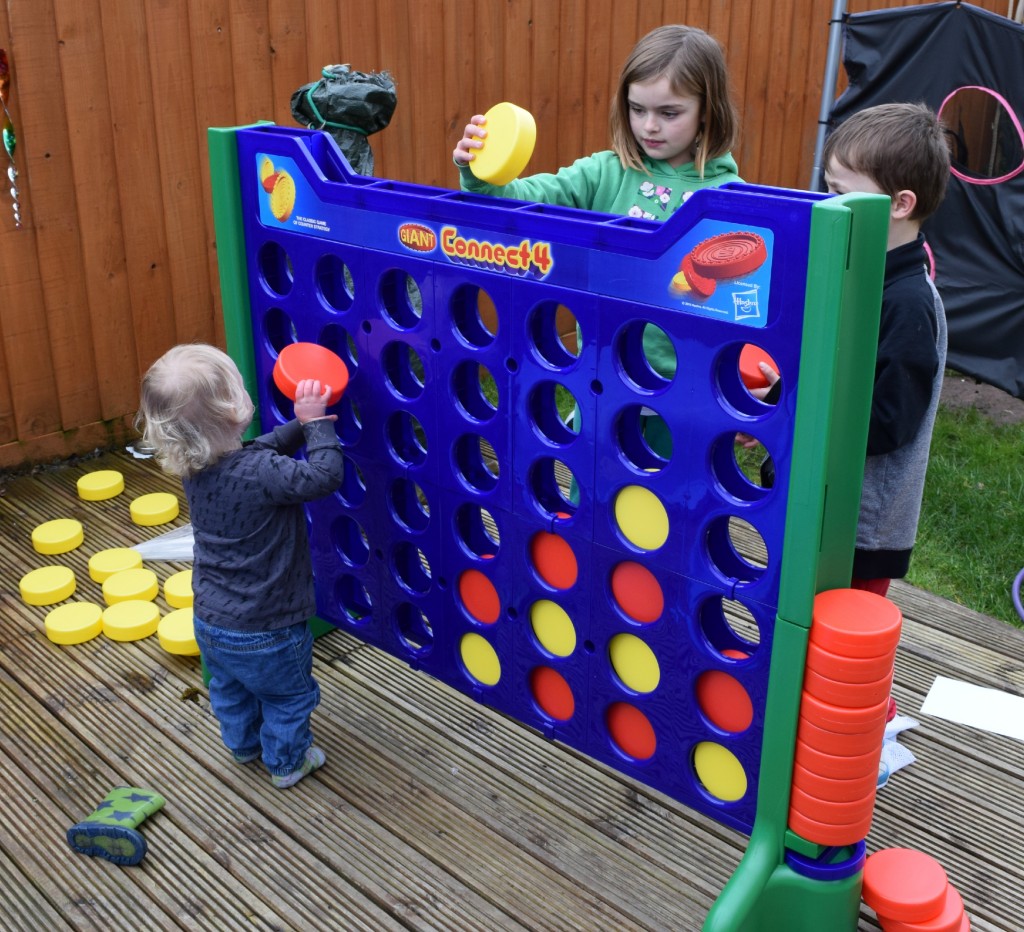 This game has been used so much already, despite the fact that the warmer weather hasn’t really found us yet. I’m sure you all know how to play – but for those who don’t, you simply choose a colour, take it in turns to drop them into the board and try to form a line of 4 in a row, at the same time trying to stop your opponent from doing the same. It’s great for teaching children sequencing and strategy, as well as turn taking. If you have friends over for dinner you could form teams and play that way too.

The Giant Connect 4 game is durable, weatherproof and strong, so it can be left outside all year round. It doesn’t take up nearly as much space as you might expect either – as it is narrow it can easily be pushed back against a fence to free up room in the garden when not in use. Priced at £189.99 it isn’t the cheapest garden toy on the market, but equally it is by no means the most expensive either. It won’t wear out after one season, the children will never really grow out of it, and it is just heaps of fun all year round. If you had enough room indoors, it could easily become an inside toy during the winter months. Big Game Hunters also offer other giant classic games for the garden, such as Snakes and Ladders and Pick up Sticks, so there really is something for everyone.

Is this something you can see yourself buying for the garden?