Anyone who follows my blog, or checks in on my social media profiles, will be aware of the fact that I want to be a midwife. I have spent the last 8 months studying an access course in order to be eligible to apply to university. When UCAS opened for applications for September 2017, I fired off my personal statement and references and crossed my fingers.

I was over the moon to be offered an interview at Plymouth University a few weeks later, and spent some time doing some reading around recent midwifery topics, the role of the midwife and the all important 6 C’s of midwifery – Care, Compassion, Communication, Courage, Commitment and Competence.

Interview day arrived and I was a bag of nerves. I drove to Plymouth, along with my colleague who also had an interview. We chatted a lot about our hopes and dreams on the way there, and practiced interview answers. On arrival, we all had to undertake a maths and english paper, before individual interviews.

I came out feeling OK. My interview had flowed well, I was happy with my answers and I felt as though I had done my best. We were told that some rejections and offers would be made immediately, but the majority of us would be waiting until April for an answer. A week or so later, I received an email saying I was indeed on the ‘wait’ pile. I consoled myself with the fact that it wasn’t a rejection and I was in with a chance.

Plymouth carried out a few more rounds of interviews, and I saw some people receiving offers. I had almost accepted that this wasn’t to be my year – it is an INCREDIBLY competitive course, and it was my first year applying. I was full prepared to have to apply again next cycle, and put it to the back of my mind for now.

Until last week. I received an email saying that UCAS Track had been updates – this is the portal that universities use to keep in touch. I logged on knowing it would be a rejection, as we had been told offers would not be made until April. Only to see this: 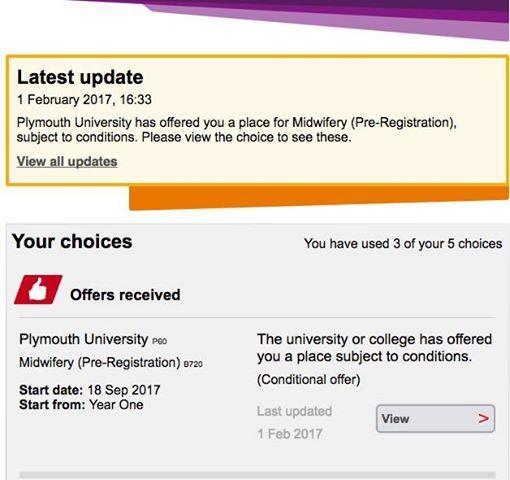 It still hasn’t really sunk in, although getting a letter confirming my place in writing has made it a bit more real. 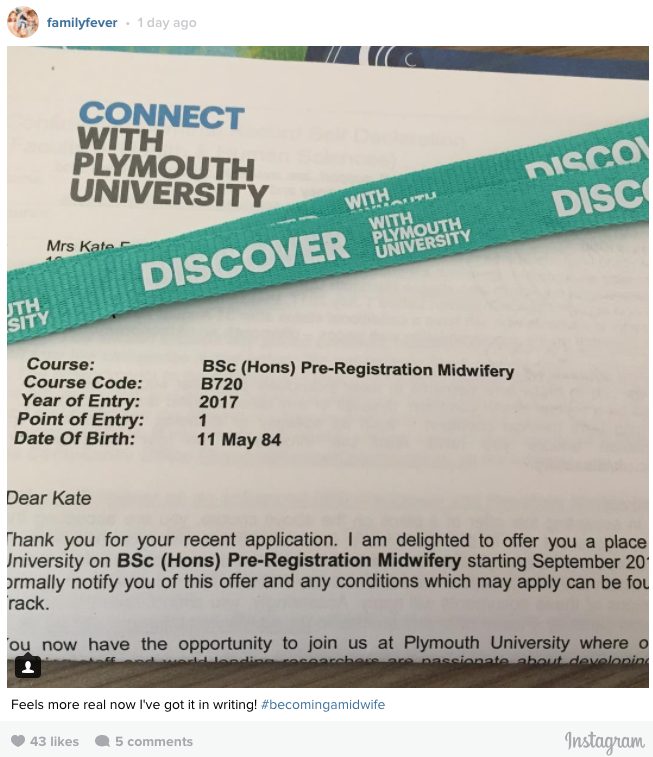 So, it’s real, and I am starting to believe it. Come September, I will be juggling family life with a full time degree, as well as working on placement in the hospital. It is going to be tough, I have no doubt, but there will be nothing to compare to the first time I deliver a baby. What a privilege it is going to be to work with families at such a special period of their lives, and support others through the tough time.

For more details on midwifery, you can read my post ‘How to become a student midwife‘.