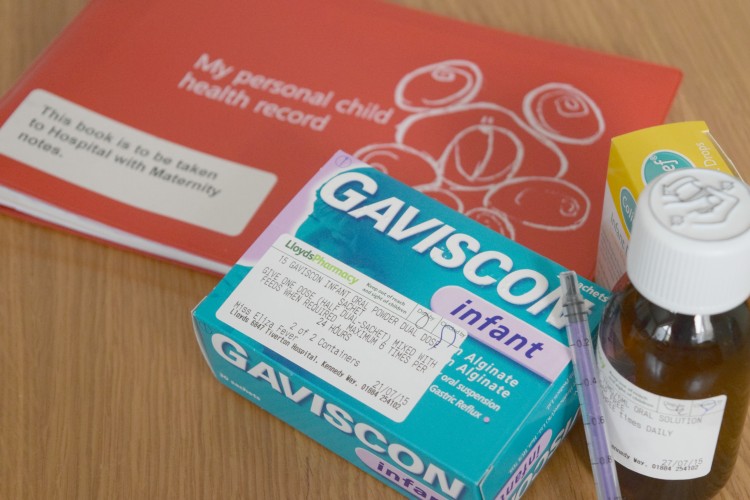 I have written before about our struggles with reflux. Max suffered terribly and was under a paediatrician until he was 17 months old. He took a cocktail of medications and was under almost constant review with regular weigh ins and health visitor checks. Finally at almost 1 and a half his reflux had stabilised and we were able to wean him off of medication and go out without several muslin cloths and full clothing changes.

When Eliza was born I always knew reflux was a risk again – it does seem to run in families. For the first couple of days of her life she seemed to be OK – she kept her milk down, she slept a lot and she was content. But when we got home from hospital it came on fairly quickly. The sickness after each feed and for hours afterwards. The crying and arching of her back as the acid burnt her throat. The inconsolable sobbing if she was laid flat on her back.

At least this time I knew the signs, and I was able to get her seen by the GP quickly. He agreed that she was suffering from reflux and prescribed infant Gaviscon. It reduced the volume of milk coming back up, but it didn’t do anything for the acid, and so very quickly Eliza was also placed on ranitidine – a medicine to reduce the acid in her stomach. We were also advised to weigh her regularly so they could make sure she wasn’t dropping down the centiles.

Now this is all well and good but the weight thing does bother me somewhat. Of course it was important to monitor her weight but I did feel that they were too much and too frequent. It put too much pressure on me during those early days, and weigh in days were fraught with stress and tension. Watching the numbers on the scales through my fingers, and then being hit with that heart sinking feeling when they weren’t ‘enough’.

She lost 12% of her birth weight, which triggered alarm bells for the midwives, who wanted her readmitted that day. I begged for 48 hours grace. I knew my baby and I knew that she was slowly turning a corner. She had started to wake for feeds more frequently, she was taking more milk each time and she was becoming more alert in between – her body just needed time to catch up. When we went back 48 hours later the scales told a similar story and she had started to put weight back on. Despite the reflux I knew she was going to be OK. So she might have been ‘slow’ to put on weight, but she was feeding, she was producing enough wet and dirty nappies and she was putting on weight, albeit slowly.

Over the next few days and weeks we continued with our cocktail of medicines and the frequent feeding that comes with having a reflux baby – they either feed because they are hungry after throwing up the last feed, or they feed for comfort and to ease the burning acid in their throats. We knew about reflux, we had been here before and we had a very understanding GP. We changed her onto a lactose free formula and the improvement was massive. She was still sick, she was still unsettled at times, but it was nothing compared to how she had been before. And that’s where we are now – still managing the reflux, still on prescription formula and medications, but managing. We are hoping to see an improvement with careful weaning and hopefully reflux will be a thing of the past soon.

But reflux stole my baby again. It stole those first few precious days and weeks where I should have been in a newborn bubble, just me and her against the world. Instead I was pumping her full of medication, trailing to the hospital every few days, anxiously watching the scales with my fingers crossed behind my back, sobbing when the numbers didn’t add up. Hating the words ‘readmission’ and ‘feeding plan’, and feeling irrational rage towards the midwives and health visitors who made me feel I had failed my baby.

My sensible head tells me that’s not true – I didn’t fail her. She’s now a happy, alert and active 4 month old. But deep down my heart tells me I failed another baby, and that will never go away. Reflux stole my baby.