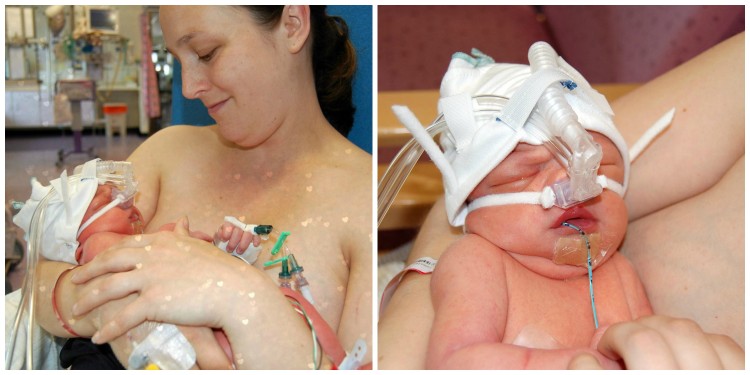 This month is Caesarean Awareness Month, and I have decided to share my 4 very different caesarean experiences. You can read my first birth story (the crash section) here, and how my second baby was born by premature section at 34 weeks here.

After Jacob was born, we thought our family was complete for a while. However, when he started school we decided we would like one more. After an early miscarriage we were over the moon to find out we were expecting another baby, and set about preparing for a new addition to our family.

The pregnancy progressed normally until around 25 weeks, when I started to be too large for dates again, and was given growth scans and regular antenatal appointments. I had polyhydramnios – excess amniotic fluid – and the baby was described as a ‘decent size’. I told Kevin all the way through the pregnancy that I wasn’t going to make it to my due date, and I said the same to the midwives and doctors, who brushed it off as nerves.

At 36 weeks and 1 day I started to have contractions. I sat it out all day, passing them off as Braxton Hicks, but by early evening it was clear this was the real deal. We made our way to the hospital, where I was popped on a monitor, which showed I was indeed in labour. The doctors told me they would not try and stop the labour at this stage, and prepared me for a section.

I was taken round to theatre and the epidural was sited. It didn’t feel quite as strong as last time, and I could feel some tingling in my leg, but after a few checks it seemed to be working well and I couldn’t feel anything on my stomach, so the surgery started. At 1.19am, Max was born – he made an attempt at crying but was grunting with each breath, and I just knew they were going to take him away. I was incredibly uncomfortable by this point, able to feel the tugging and pulling as I was stitched, but I refused the offer of a general anaesthetic as I wanted to be awake – just in case my baby was able to stay with me. I didn’t want to miss a moment.

The paediatrician was called and Max was taken to SCBU, as I had suspected he would be. People think that 36 weeks is ‘almost full term’, but in reality it is still a month early, and premature babies can have any number of problems. Max needed help with his breathing, and was put on CPAP –  a breathing machine that helped to force the air into his little lungs. It was utterly heartbreaking seeing him like that, covered in wires, hooked up to countless machines with his little face barely visible.

He remained on CPAP for 48 hours, and after lots of skin to skin and help from the SCBU nurses he was able to have his first breastfeed. We came home 3 days after he was born, and he has grown into a happy, healthy, curly haired little boy full of independence and questions.

This was my third caesarean section, and all 3 had ended up as emergencies, and all 3 of my babies spent time in SCBU. I was gutted that I hadn’t had a calm, planned C section, and devastated that I hadn’t ever had the chance to hold my newborn baby in my arms straight after birth. They had all been taken away from me, and I hated that. I felt guilty – my body kept letting me down, I didn’t do pregnancy well. I kept being told ‘your baby is healthy, that’s all that matters’ – but it isn’t is it? What about my health? What about the birth trauma I had suffered with every birth? That matters too.