This month is Caesarean Awareness Month, and I have decided to share my 4 very different caesarean experiences. You can read my first birth story (the crash section) here.

When Gemma was about 1, we decided we would like another baby, and I was lucky enough to fall pregnant fairly quickly.

I was anxious about the birth from day 1, and made an appointment to see my consultant when I was 20 weeks pregnant. We discussed the options available to me, and I was offered an elective C section at 39 weeks, due to my previous traumatic birth, and the fact that this baby was already measuring quite large. We were happy and comfortable with this decision, I felt more in control, and we went away looking forward to what was to come.

I was having regular growth scans as I was large for dates – it was obvious this was a large baby and there was a lot of amniotic fluid present too. They mentioned that they may bring the C section forward to 37 weeks if the growth continued at the same rate.

At 34 weeks, I had a routine appointment with my midwife. She did all the usual checks and said everything was fine, before helping me off the bed. I heard a popping sound, and my waters broke all over the floor. My midwife immediately referred me to the hospital, and I drove myself there, feeling the start of contractions at the bottom of my belly. As soon as I arrived at the hospital, I was whisked to a room, popped on a monitor and a doctor arrived to examine me, before telling me that I would be having my baby that day.

It was too soon. 34 weeks was 6 weeks too soon. My baby could be sick, he could struggle to breathe, he might be tiny, jaundiced and unwell. I was terrified.

I was taken to theatre and given an epidural – at least I would be awake to see this baby come into the world, but tears were streaming down my face at the thought that he may not cry, he might be in a really poor condition. A paediatrician was called to theatre ready to look after my  baby when he was born.

Not long after the operation had started, I felt a huge tugging sensation, and my baby was lifted above the screen, with a huge cry. He was breathing! 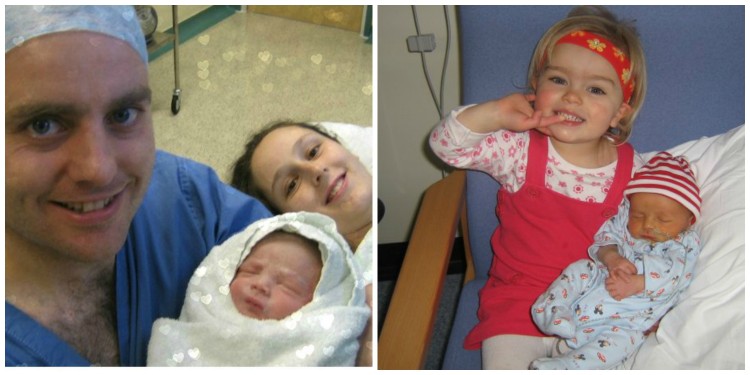 Jacob was born at 7.57pm, and weighed a whopping 6lb 4oz. He was pink, breathing alone and looked in great condition overall. but he was taken to the SCBU for monitoring. I was left without my baby in my arms, for the second time, and those feelings of guilt washed over me again – why had my body gone into labour at 34 weeks? Why couldn’t I have kept him inside for longer?

Jacob did pretty well for a 34 weeker, feeding from me within 2 days and not needing any treatment for jaundice. He needed some help with his body temperature and stayed in SCBU for 2 weeks until he was putting on weight well. Leaving him in the hospital when I was discharged was the hardest thing I have ever had to do. He was my baby, and I wanted him with me – instead I had to leave him behind. What if he needed me? What if he thought we had abandoned him? When he cried, we wouldn’t be there. These thoughts consumed me all day, every day.

Again, I had lost all control of the birth, and I felt cheated. This baby was supposed to be my elective C section, the calm, controlled birth I so desperately wanted and needed. Instead I had given birth too soon, it had been another emergency caesarean, and I regularly question what I could have done differently to keep him inside me for longer. Jacob turns 8 next week, and he is a happy, healthy, football mad little boy – a true little fighter.